OME Presents continues with a very special guest: Lauren Sarah Hayes! Those of us at OME are so, so excited to give the reins to Lauren as she, and several friends, create out-of-this-world electroacoustic music. According to Lauren’s BIO:

“Lauren Sarah Hayes is a Scottish improviser and sound artist. Her music is a mix of experimental pop/live electronics/techno/noise/free improvisation and has been described as ‘voracious’ and ‘exhilarating’. She is a sculptress of sound, manipulating, remixing, and bending voice, drum machines, analogue synths and self-built software live and physically. She is excited by what can happen in the vulnerable relationships between sound, space, and audience. Her shows are highly physical, making the performance of live electronic music more engaging for audiences.

She has been commissioned by major festivals including the London Jazz Festival, the Huddersfield Contemporary Music Festival with a live BBC Radio 3 broadcast as part of its 2017 International Showcase, and Sonica, for which she gave four sold-out performances inside Hamilton Mausoleum, Scotland, famous for once holding the longest echo of any manmade structure. She has performed extensively across Europe and the US and The Wire described her most recent album MANIPULATION (pan y rosas discos) as “skittering melodies and clip-clopping rhythms suggesting a mischievous intelligence emerging from this web of wires”.

She is Director-At-Large of the International Computer Music Association, and a member of the New BBC Radiophonic Workshop, with whom she has been involved in the Oram Awards, responsible for promoting forward-thinking work from women and nonbinary artists.”

To learn more about Lauren and her music visit: https://laurensarahhayes.com or find her online @elleesaich! 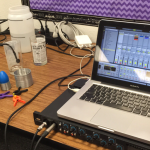